Originally for my nudge I had planned to encourage people at ITP to enjoy outside.  I came up with a few different nudge ideas to do this.

The first one was to get a basket and fill it with various outdoor equipment and put it near the elevators.  I originally thought this would be a nice nudge because it would give the person the idea of going outside while also some direction as to what to do without saying either. It was also a nice bonus by encouraging people to get moving too. 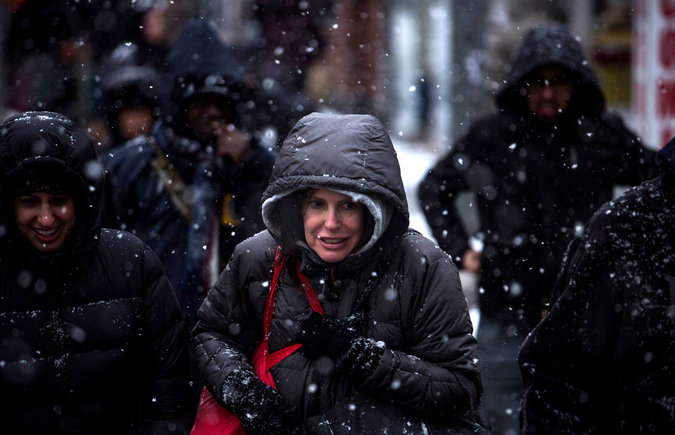 I then realized maybe I could use the “stick” method instead of the “carrot” to do this by posting pictures of the people bundled up in winter outfits and add a reminder that winter is coming.  This picture would show the reality of what we are going to face fairly soon and not the glorified one that shows it only after the first snow.

However, I ran into a few issues with all of these. As I was about to hit buy on Amazon for balls and other outdoor equipments, I started to think about the best days to do this.  Since it is at the beginning of the semester most people would be on the floor on Wednesdays, Thursdays, and Fridays.  This was great since it was after class but it is also the same time as the help sessions and other club meetings. After talking to a few people, I started to realize that people are just on the floor to get their work done and then go away especially on these days.

In addition, the idea of the images felt more like a push than nudge since they were pretty much telling the person to go outside.  Also, for people that haven’t been here during the winter might not understand how miserable it can get.

Ultimately, the deciding factor was quantification.  How can I quantify if people are going outside once they leave the floor? Cameras would only catch them leaving but not where they end up.  They could have taken the balls but that could have just been to take them.  It felt like there was no way to fully quantify the success of this experiment.

Because of this, I decided to switch to a more personal nudge experiment: removing eye contacts.

I have to confess that I am not the best at taking out my contacts each night. I don’t go forever without taking them out but it will be a few days.  My nightly regime was usually done before I fully finished homework or reading so I usually needed my contacts and preferred contacts over glasses.  These are the retrospective reasons I have determined for not keeping consistent.  However, I know I need to do this.  It’s something can be dangerous and cause diseases.  I decided that this was something I needed to try to do for my personal well-being.

I decided I could do this by putting up a picture of diseased eyes. It helped with things like cigarettes so why not contacts. I originally thought I would put it on my phone but I decided that wouldn’t be good for two reasons: 1. I didn’t want to flood myself with the image to the point that I couldn’t even wear contacts again. 2. I didn’t want others to see the gross picture and think I’m a weirdo.

Because of these, I decided that I would put up a picture in my bathroom.  This would keep the association to the bathroom and only when I was home.  In my research for a picture, I found an article about a young woman who did not take out her contacts for six months and microscopic bugs ate her eyes to the point she went blind.  The picture attached was beyond disgusting (Warning: Picture is Repulsive.)  While the DailyMail isn’t the most accurate in news, it was useful for this experiment.

I printed the picture in black and white because my roommate would not have been pleased with the colored version. For me, even when looking at the black and white, I could still see the sickening colors.

I put the picture up on Thursday night and started the experiment.  I left it up throughout the weekend.

I can say that I was surprised about how well this worked. Not only did I take them out, I also wouldn’t wear them when I didn’t need to.

On Thursday before putting up the picture, I was already disgusted to the point that I had to take my contacts out. After that, I was diligent about taking them out as soon as I got home.  Even when I spent the night at my boyfriends, I took them out before going to bed without the need for the picture.  Every night, has been a successful one.

I don’t think I would want to keep this picture up forever. Not only is it disgusting, but it also could lose some of it’s power after awhile.  However, I think that I could use this in the future if I stop being as diligent about taking them out.

Also, I plan to do something about the nudge of encouraging people to go outside as a personal project. It’s too nice outside to miss this opportunity.